free  NFL prediction for Sunday, November 28th. 2021  is on the Baltimore Ravens  three and a half over the Cleveland Browns. The Browns will make their way to Mt. Stadium in Baltimore this Sunday to Akon. The Ravens, in an  AFC. North battle, Cleveland comes in at forth in AFC North with a 6 and 5 record after beating the Lions 9:47 last time out. Meanwhile, the Ravens lead the AFC North with a seven and three record after beating the bear, 16  213. Last time out. They should have an even easier time here in week 12.

Jackson has a four in one Mark against the Browns with an eighty five point eight. Total quarterback rating Baltimore thrive. Against AFC, North covering the spread in eight of their last 10 games, not to mention the Ravens play well against ranked opponents. Covering the spread in six of their last eight, against a team with a winning record, the Ravens also have a history of  covering against Cleveland doing so in eight of their last  11 meetings. be sure  to play Baltimore  three and a half 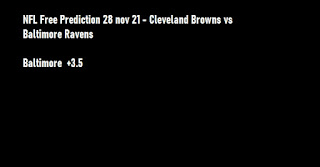