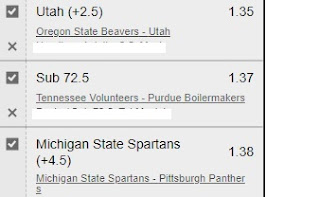 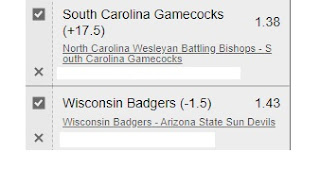 So this game is going down in Charlotte. We've got the Tar Heels 10   against South Carolina, Gamecocks, total on this one's 57. Now, this line opened at UNC    5, then it  jped up to minus 10.  Tell us why that nber so much movement on it. Yeah,  for this game. It was really coming down to,  which I was very surprised when he announced this. That Sam Howell, the starting quarterback for North Carolina will be playing in this game.  And then everybody loves him howl. He's projected to be a top  top prospect quarterback heading into this year's draft. Obviously the season that that  North Carolina Tar Heels had this year was not a very good one.  Considering they started the year nber 10 in the nation. And now they're looking at the Dukes Mayo bowl at is a

six and six team against a six and six South Carolina team. Both, these teams have struggled against the spread so far this season and I think this lines move just way too much.  We have North Carolina. I had the screen protector on eight and a half. So  I want to go to South Carolina. And this game. This is just one of those spots where once the lines moved Five Points,  obviously, if this was North Carolina, 5 still, I'd be all over. Thar Hills in the spot. Just by a nber thing. I can see this being Tar Heels by seven in this game.  We have North Carolina coming into this one off of a heartbreaking loss in their last game. They were up 10 points against NC State in NC State, big rivalry game. He played in Raleigh there and  they were up 10 points and they gave up a touchdown. And then
NC State recover, the onside kick and scored another touchdown to win that game, 3430.  They still covered that game, but they were Five and a half Point dogs, and South Carolina comes into this game off of a 32, nothing lost versus Clemson. After they beat Auburn 21 to 17 to  secure their spot in a bowl game. This year, both  teams, I believe South Carolina, this is probably an okay season for them. But North Carolina obviously, had higher expectations for this year. And I think this is a spot where I don't know how much they truly care about the Dukes Mayo Bowl here,  maybe a little bit of   enthusiasm. They're  playing another Carolina, but this is a spot where I think this is just way too many points at this point. Yeah, like I could say,  okay, so
Sam how coming back, maybe he's coming back because of that atrocious, lost with NC State, and that's not how he wants to finish his career. You know, it's a wellcoached team that did not do well this year, good quarterback, who didn't do great quarterbacking this year.  So I'm with you and then I would be on   UNC Five Points all day long, but 10  like you said too many points, especially with two teams, so close in proximity fans are going to travel. The people will come to watch these to play. And I think like, you said, 10 is too many points
nick,sean Yout.pp

free college football prediction. November 26. 2021  is on the Kansas State, Wildcats plus three and a half over the Texas, Longhorns. The Wildcats will. Oh, make their way to Austin Texas. This Friday to take on the Longhorns in a big 12 face off. Kansas state is coming off. A 9:40 loss to Baylor last time out, but prior to that, they were writing an impressive  four, game winning streak. They now hold a 7 and 4 record on the season. Meanwhile, the longhorn season has seemed to turn to a disaster. They come in writing one of the worst losing streak in the teams history with six straight defeats and have slumped second to last in the Big 12. In their last match up, they faced West Virginia and allowed four hundred and fifty nine yards of total  offense in the 31 to 23, defeat. Their defense has been nonexistent as they are allowing 439 yards and 32.4   points per game. And it doesn't help that their offense is missing huge key players. They hold a terrible 2 and 7 record in conference play and they now must face another big 12 opponent here Friday, Texas has not only failed to win their last six in a row. But they've also failed to cover in all of those six, Kansas state has proved to be a solid team, and they will be eager to bounce back after a loss in their last match up. So be sure to play Kansas State plus three and a half here, Friday.