free and I fell pick for Sunday December. Fifth 2021  is on the Arizona Cardinals minusseven and a half over the Chicago Bears. The Cardinals will make their way to Soldier Field in Chicago, this Sunday to take on the Bears. Both teams are coming off of wins. Last time out. The Bears last faced, a winless Lions team and were only able to  outscore them by a mere two points in 11:46 Thanks giving Victory. Regardless, a win is a win and they now improve their record to four and seven on the season while ranking third in the NFC North mean, Arizona leaves. The  NFC West, with a 2 record. They're coming off a bye in week 12, but prior to that, they beat Seattle, 23 13.  Not only do they lead their division, but they also hold the best record in the entire NFL.  They have been Unstoppable on the road, this season with a perfect 6 and  record away from home. They've also covered in seven of their last nine games overall. And in four of their last five verses Chicago, Chicago on the other hand, is just one in five against the spread in there. Last six games overall and Owen for Against the Spread and their last for as a home. Underdog, Arizona has a solid defense that ranks in the top five in total yards allowed passing yards allowed and points allowed per game. They should easily be able to limit the Chicago  offense that ranks in the bottom five in those same categories. So be sure to play Arizona minus  seven and a half

free NFL picks. For Sunday, December 5th, 2021 is on the Atlanta Falcons plus  11. Over the Tampa Bay Buccaneers. The Buccaneers will make their way to MercedesBenz stadium in Atlanta, this Sunday to take on the Falcons in an  NFC South battle. The Falcons come in at second in the NFC South with a five and six record, after a to 14   win over the Jaguars on Sunday. Meanwhile, Tampa Bay leads, the

NFC South with an 8 and 3 record, after beating the Colts 38 to 31 in their last. Matchup, however, Tampa Bay does tend to play a bit differently while on the road while the Bucks, boasts, one of the best  offenses in the league. Their defense has  now allowed an average of thirty, two point, three points, and their last three away Gates not to mention. They've only covered once in their last six away games and every single one of their three losses. This season have been on the road. Not to mention the home team has had a history of covering between these two teams doing so in seven of their last nine Meetings. We ultimately think this spread is too large.  play Atlanta plus  11

free NFL pick for Sunday, December 5th, 2021  is on the Denver Broncos plus  10 over the Kansas City Chiefs. The Chiefs will host the Broncos at Arrowhead Stadium in Kansas City here in week.   13, Kansas. City comes in leading the AFC  West with a 7 and 4  record. However, Denver is tied with three other teams right below that with a 6 and 5  record. Both teams are coming off of wins. Last time out the Chiefs last face the Cowboys and one 8:41. It was their fourth win in a row. Meanwhile, the Broncos are coming off a 22:13 win over the Chargers on Sunday. It was their third win in their last four games. While Kansas City has been going strong. Denver has also seemed to turn their season around their defense has been above average and has held their opponents to 16  points or fewer in four of their last five games. While the Chiefs have a history of beating the Bronco straight up. The last ten contests between the Broncos and the Chiefs have been decided by 10 points or fewer. Lastly. The, the Chiefs are a bad 2 and 10  against the spread in their last 12 games at home. We ultimately see 10 points being too high and expect a pretty competitive game. So be sure to play Denver +10

Now, you're free NFL. Pick for Sunday, December 5th. 2021  is on the Miami Dolphins, minus  4 over the New York Giants. The Giants will make their way to Hard, Rock stadium in Miami this Sunday to take on the Dolphins here in week 13,  the Giants come in after splitting their last four games and sit last in the  NFC East, with a 4 7 record on the season. Meanwhile Miami

comes in at third in the AFC East for the 5 and 7 record. They're currently riding a fourgame winning streak after 33. 210 victory over the There's last time out. It was their third game in their last four, where they held their opponents to 10   or fewer points. The Giants   offense is only putting up 317 total yards and 18  point four points per game, and New York should struggle against this surging. Miami defense, Giants quarterback, Daniel Jones played through a  neck strain last week and it is still unclear. Whether he will play in this matchup. If not, Mike. Glennon is the backup to start for New York, and he hasn't want to start since 2006. 18  on the other end, the Dolphins have been benefiting from a healthy to a tugga by Lowa, back in their lineup. Plus not only have the Dolphins won, their last four straight, but they've also covered


N.IRE GLENTORAN VS PORTADOWN OVER 1.5

N.IRE COLERAINE VS LINFIELD OVER 1.5

HOL CAMBUUR VS VITESSE OVER 1.5 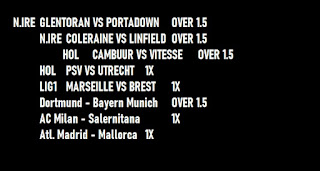 you're free  NFL prediction for Sunday, December 5th. 2021 is on the San Francisco 49ers, minus  3 over the Seattle. Seahawks. Hawks these two teams will face off for the second time. This season, this time at Lumen field in Seattle. The Seahawks took the first win at Levi Stadium on October 3rd, and the 49ers will be eager for revenge in this matchup. Since then, the Seahawks have been struggling losing six of their last seven, including their last three straight and their only win over. That span came against a terrible Jaguars team. The 49ers on the other hand have seemed to be playing some of their best. 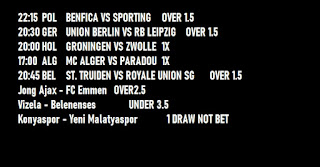